This is a guide for aiding the prospective researchers, funding organizations and other conservationists to understand and identify the most important areas in Neotropical raptor research and conservation. This guide is maintained relevant and current by the Advisory Board of the NRN.

In many cases very little is known about the relative abundance and the distribution of endemic Neotropical raptor species. Without sufficient data on the abundance of a species it is difficult to determine whether a species is experiencing a decline or it is just naturally rare. Basic information on the relative abundance and other factors affecting several Neotropical species would improve knowledge on their population status and help direct further conservation work if necessary.

Life history parameters include such things as breeding biology (nest type, clutch size, breeding season, behavior and frequency) foraging ecology (diet, foraging and feeding behavior), movements (dispersal and habitat requirements.) As with the lack of distribution and abundance data, a lack of understanding in this area makes it difficult to offer useful solutions for conservation for species that are naturally rare or whose populations have declined. Solid life-history information for all species of Neotropical Raptors is essential for conservation success.

The primary threats to raptors in the Neotropics are either directly or indirectly incurred by humans. These threats to raptors are generally synonymous with threats to the entire ecosystems. Raptorsï¿½ unique area-sensitive, far ranging, top-predator ecology, make them important sentinels of ecosystem change. This capacity has earned them a likening to the canary in the coalmine, providing an early warning of dangerous environmental conditions. A study of the anthropogenic impact on raptors will be helpful to raptor conservation and it may provide timely warnings to threats against a broad range of Neotropical biodiversity.

Preservation of vast tracts of unused land would be the ideal method of conservation; however, it is likely that habitat in the Neotropics will continue to be altered for forest product extraction, agriculture, animal husbandry and the general needs of a growing human population. Under these circumstances it is important to pursue development strategies that have as little negative impact on biodiversity as possible. Protection of raptors, due to their relatively wide ranges and needs for a healthy ecosystem, can help ensure the protection of wide range of species and biodiversity.

Although raptors represent one of the best understood of all the vertebrate taxa, much remains to be learned about the taxonomic relationships of many species and even genera in the region. Such understanding is critical to evaluating the extent of raptor biodiversity in the Neotropics, which, in turn, is critical to developing practical and effective programs for protecting that diversity.

Because of raptors position at the top of most food chains their prey base directly and indirectly encompasses a large portion of entire ecosystems. A clear understanding of the predation ecology of Neotropical raptors will go a long way to understanding the role that these predators play in Neotropical ecosystems, and it will help provide strategies for their conservation.

Raptor Migration in the New World is a spectacular event. Migration plays a special role in the lives of Nearctic and Neotropical raptors, making many of them international and even intercontinental travelers, affecting other more sedentary species via the potential for increased competition with migrants, and requiring collaborative large-scale efforts for their protection. Migratory behavior requires conservationists to work across political boundaries and take into account an ecology that both unites the Neotropical biogeographical realm as well as the Nearctic. Studies of pattern and process Neotropical raptor migration, as well as its ecological consequences for the region, will provide important insights into Neotropical ecology and into this important aspect of the lives of many raptors.

Studies of the community ecology of Neotropical raptors are in their infancy. We still lack a basic understanding of how the more than 100 species that inhabit the region interact with one another, both as competitors and as potential prey or predators. Given the rich diversity of raptors in the region, studies in community ecology offer the hope of making significant contributions to the field in general as well as providing rich insights into how better to protect them.

The December 2019 issue of Spizaetus is now available! 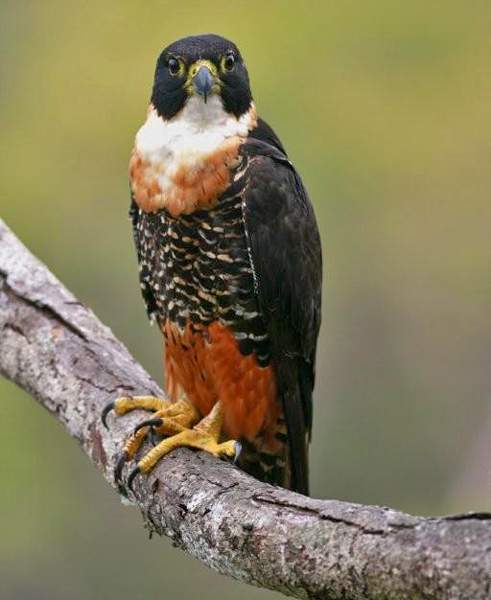 Marta Curti - mcurti@peregrinefund.org for questions in Spanish or English